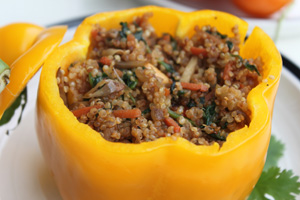 Most of these summer vegetables and herbs will still be available at Winter Market this week, then visit our neighbors at the Dubuque Food Co-op or The Food Store for your quinoa!

Bring the broth and quinoa to a boil in a 2-quart saucepan, stirring constantly. Reduce the heat and simmer, covered, 10 minutes. Fluff with a fork and put in a large bowl.
Preheat the oven to 375º F.

Cook the peppers, in a large pot of boiling water, 3 minutes. Remove the peppers and drain, inverted, on paper towels.

Combine the remaining ingredients with the quinoa. Divide the mixture among the peppers. Place the peppers upright in the baking dish and bake 15 to 20 minutes.